Updated x3: And here we are, yet again, defending the LWCF in 2018. #SaveLWCF

As of October 2015, Congress is allowing a wildly successful, largely bipartisan, half-century-old conservation program — with a really clever funding mechanism — to expire without a fight.  It’s a strange situation, possibly having more to do with factional gridlock on other budget matters rather than the issue at hand.  And it’s likely to be under the radar for many bike advocates, particularly those interested in urban transportation or transportational cycling.

But the untimely and inexplicable death of the Land and Water Conservation Fund deserves the attention of urban cyclists, city planners, and biking advocates.  While it might appear on the surface to be mostly a concern of wilderness advocates or recreational outdoorsmen, the LWCF has a hidden history in the American city; one that looks now to be under threat.

The Land and Water Conservation Fund Act of 1965 (P.L. 88–578, passed in 1964) created a dedicated federal source of funding for outdoor recreation resources.  Philosophically, this was a piece of pre-environmental era legislation; it was conservationist, dedicated to facilitating the use of public lands for recreation, including hunting, fishing, hiking, and more.  The purpose of the act was “to assist in preserving, developing, and assuring accessibility to all citizens … such quality and quantity of outdoor recreation resources as may be available and are necessary and desirable for individual active participation … and to strengthen the health and vitality of the citizens of the United States.” 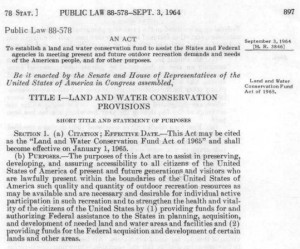 The original 1964 text of the law found funding for these purchases in three places: “entrance and user fees” from already-established federal parks, “surplus property sales” of unneeded public lands, and a “motorboat fuels tax.” Had the law stayed with that modest funding, we would probably not be talking about it today.

But in a 1968 revision, the LWCF added a much more significant source of revenues: Federally-controlled leases of offshore, or “Outer Continental Shelf” submerged lands for oil and gas extraction. The vast offshore, ocean-floor areas are not considered to be under the control of the states, but rather the federal government; the idea was that these were federally-controlled natural resources, and the proceeds from their development should be turned right back into the natural resources which were more immediately accessible for Americans.[1]

Through a variety of revisions in the 1970s and 1990s, the LWCF has “remained the principal source of funds for federal acquisition of lands for outdoor recreation,” according to a 2014 report from the Congressional Research Service.[2]

The LWCF and “Bikeways”

The 1965 LWCF, and its 1968 revision, came at a particularly key moment for bicycle infrastructure.  A significant resurgence in recreational cycling was well underway in America by this time.  In the book Bike Battles, I call this the “bikeway” revolution, after the term that was a hallmark of that era and has largely faded from popular usage since (though it is still a term of art in transportation planning). Bikeway advocates in the 1960s imagined trails, lanes, paths and more appearing in American cities, and furthering the return of the bicycle.  But this movement was significantly hampered by a critical absence of dedicated funding for paths, trails, signage, maps, or development.  Departments of transportation — whether on the state or municipal level — weren’t tasked with providing for bicycle transportation.  State or local parks and recreation departments did not have the wherewithal.  The Federal Highway Administration had dedicated gas taxes, but only for separated interstate infrastructure; attempts to allocate those funds for transit, bicycle or pedestrian funding were rarely successful in Congress.  While FHWA funds for bikeway projects would occasionally begin appearing in the 1980s and 90s, it wasn’t at all clear where funding for bicycle-specific infrastructure would come from in the decades preceding.

Tantalizingly, the federal government did start supporting urban bike infrastructure in the 1960s, but from an unlikely quarter. The Department of the Interior — generally associated with the scenic national parks, and managing resource extraction and recreation on federal lands – began to eye the cities as well. It started with the Interior Department matching local funds with $2 million for national park trails in 1960, but was accelerating by 1964 when “Interior Secretary Stewart L. Udall, deploring ‘the tyranny of the automobile,’ endorsed … a call for more bicycling space” while speaking to industry groups and American Youth Hostels, then the most active nationwide promoter of bicycle touring. The next year, Udall started the two-year study that would eventually produce the “Trails for America” report, a remarkable document promoting hiking trails in national parks but also bike paths and lanes in cities: “to avoid crossing motor vehicle traffic, bikeways would be located along landscaped shoulders areas on frontage roads next to freeways and expressways, along shorelines, and on abandoned railroad rights of ways,” or “along quiet back streets and alleys.”[3]

The report was the basis for 1967 congressional hearings on what would eventually be the National Trails System Act. Along with projects related to the Appalachian and Pacific Crest Trails, one version of the bill included “the metropolitan areas of the Nation” as a venue for bicycle trail building. As Secretary of the Interior Stewart Udall pointed out, Interior had already provided $365,000 for “urban trail development in or near 12 large cities.” It wasn’t much money in the great scheme of things, and Udall didn’t envision more federal funding beyond this pilot project: “we would encourage the States . . . and the cities . . . to spend more money on this type of project,” said Udall in the hearing, meaning that no one should hold their breath waiting for more federal support.[4]

But the LWCF proved to be a consistent, though minor, source for funding these kinds of bikeway projects.  Through the granting program by which states could disburse LWCF funds for the improvement of recreation facilities, individual bikeway programs sought funding from the federal government in cities across the nation.  The photos on this post are examples of these projects — in Denver, Colorado, Sloan Lake is well within city limits; the paved bikeway ringing it and connecting the park to surrounding road grid is the sort of fill-in project LWCF funds would be applied to.  Likewise, the Cook County Forest Preserve District manages sprawling complex of trails and parks; the connections between those spaces throughout the county links the sprawling metropolis in alternatives to the auto-centric streets.

As Bruce Epperson puts it in his Bicycles in American Highway Planning: The Critical Years of Policy-Making, 1969-1991, the LWCF was “the first large source of funding available to support any type of state or municipal cycling projects.”  That alone would make it noteworthy in the history of American cycling.  But the LWCF also “quickly became a prolific source of money for bicycle facilities. Between 1969 and 1975, roughly $71.75 million, about eight percent of all LWCF funds, were spent on bicycle programs.”[5]

These projects were occasionally chronicled by the Bureau of Outdoor Recreation, a Department of the Interior program briefly subsumed under the short-lived Heritage Recreation and Conservation Service.  In essence, it seemed that LWCF funds were used for the types of connecting trails and paths that wound through parks, utility rights-of-way, wetlands and other forgotten corners of the urban landscape.  According to Epperson, the LWCF did not readily grant applications from states or localities that emphasized transportation over recreation; but in truth, there’s really no separating those two functions when it comes to the bicycle.  Short paved paths through parks or along rivers or canals could serve both as outdoor recreation, and convenient neighborhood connection for commuters.

What killed the LWCF?

First off, the projects it funded were meant, from the beginning, to be very small.  It was supposed to be an incremental measure, meant to fix the many small gaps in previous acquisitions or construction.  It’s rare that Congress concerns itself with this sort of policy mechanism, favoring the bold legacies of major change.  This was more like a steady implementation of countless tiny improvements to facilitate the access of the American public, instead of the vast strokes of the acquisition and protection of national and state parks.  As such, it was perfect for the small scale of bicycle infrastructure:  too small to warrant the intervention and commitment of tax funding or the interest of transportation agencies, individual bikeway projects of ten or less miles would certainly fit into the scope of individual LWCF grants.

Additionally, the structure of the stateside funding of LWCF forced comprehensive planning.  While the individual grants could be quite small indeed, the LWCF eventually required that they be made within the context of a Statewide Comprehensive Outdoor Recreation Plan, or SCORP in the acronym-happy world of policy.  Wisconsin’s 2011-2016 SCORP, for example, reflects the LWCF priority of access, and includes both concerns of connecting urban America to the outdoors, and bicycling infrastructure.

The LWCF’s funding mechanism demonstrates its conceptual origins, and had to have been a long-term strength.  In linking revenues from extractive use of public lands to the conservation and enjoyment of public lands, there is a philosophical linkage of the funds raised off of public lands being used to conserve public lands for the use of future generations.  This is a very conservationist approach that views the goal of public lands to be their use.  This was probably a strength and not a weakness of the program; advocates could, and still do, highlight the fact that the LWCF was never tax-based, so did not extract funds from the public’s pocketbook.

Still, the LWCF has always had the problem of essentially unallocated funds, which proved incredibly attractive over the years to legislators looking to plug budget gaps elsewhere.  The LWCF was never really truly funded; the monies that were available from the sale and lease of offshore rights were not fully committed to the LWCF, but depended upon congressional action within the budget to assign funds to spending.  This left a significant “un-appropriated” total, something that critics seized upon.  The unseen actor that was “failing” to appropriate here was, of course, Congress.

It’s possible that the two-part structure of federal and state disbursement of LWCF monies eroded congressional support; in a 21st century era of anti-Federal sentiment, one powerful congressional critic specifically identified the balance of state and federal spending priorities as a reason for opposition to re-authorizing fund allocation.  “[T]he program has drifted far from the original intent,” said House Committee on Natural Resources Chairman Rob Bishop (R-UT) in a statement just days before the reauthorization deadline.  “Under my chairmanship, the status quo will be challenged.  Any reauthorization of LWCF will, among other improvements, prioritize local communities as originally intended.”  It’s not entirely clear that anyone else perceived this funding imbalance as an existential flaw of the program. But this language fits with Bishop’s largely anti-executive branch, anti-Federal power, late-sagebrush-rebellion chairmanship of the committee.

The ability of new funds to be collected for the LWCF was allowed to expire on September 30, 2015.  It’s likely that a revenue-starved Congress will find other uses for those funds; many would view that as essentially free funding, available to support other legislative goals without the unpalatable option of raising taxes.

In America, which has lagged in meaningful investment in bicycle infrastructure throughout the 20th century, people riding bicycles — whether for recreation or for transportation — have depended on short stretches of pavement connecting neighborhoods, cities and parks.  The LWCF may very well have funded those stretches of their rides, without their even knowing it.  And now it may be gone.

[1] For further discussion of the changes in funding over time, and particularly the allocation issue, see the Resources for the Future report written by Margaret Walls, “Federal Funding for Conservation and Recreation: The Land and Water Conservation Fund,” (January 2009).