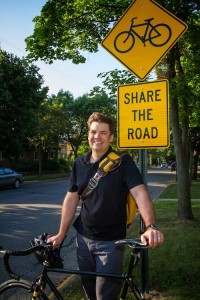 James Longhurst is a historian of urban and environmental policy, and a professor at the University of Wisconsin – La Crosse with a Ph.D.  from Carnegie Mellon University.  The author of the book Bike Battles: A History of Sharing the American Road, he volunteers his time for a variety of active transportation policy projects.  He was named “Advocate of the Year” by the Wisconsin Bicycle Federation in 2016.

Bike Battles (University of Washington Press, 2015) has been reviewed in twenty-six scholarly and popular publications, ranging from the Wall Street Journal to the Journal of American History. The book was named one of the “Best New Bike Books” of 2015 by Momentum magazine, and is now in translation as Las Batallas de la Bici (Katakrak Press, 2019).  Longhurst’s research seeks to understand how our past decisions have shaped the communities in which we live today; often leaving us social, environmental, and health problems that might not have been intended but are nevertheless ours to grapple with. He examines this history through legal and governmental records, but also in popular culture.
In addition to many scholarly presentations at conferences ranging from the Transportation Research Board to the Urban History Association and Walk/Bike/Place, he has spoken at libraries, club meetings and bike shops more than 45 times in locations including Milwaukee, Madison, Portland (Oregon), Missoula, Seattle, Washington (D.C.), Fairfax (Virginia), Minneapolis, Pittsburgh (Pennsylvania), and Karlsruhe, Germany.  He’s been interviewed or quoted in Popular Mechanics, Fast Company, Streetsblog.net, Seattle Magazine, Vox.com, and more. His opinion pieces have appeared in the Pittsburgh Post-Gazette, the New York Daily News, and The European magazine.
His first book, Citizen Environmentalists (2010), described the rise of local environmental organizing in Pittsburgh and the United States  in the 1960s and 1970s.