“A historian is only as good as their sources.” It’s a common refrain in the seminar rooms where historical research is taught.  It means, among other things, that historians are dependent on what we can find — what material records have lasted from the past into the present, and have somehow been protected from the ravages of time, still accessible to researchers and usable as evidence.  The stories that we individually might want to tell, or the questions we want to answer, are limited to what we can find to support those observations.

This axiom was not just an abstraction as I was researching the history of practical cycling over the last five or six years; it was a frustrating reality.  Because everyday bicycling was often dismissed as unserious and not worthy of scholarly thought, there were huge gaps in what records had been kept through the 20th century. Particularly in the professional archives where historians prefer to work — where records are kept organized and accessible not only to us but to our readers — bicycles were not always a subject of active preservation.  I found that governments, which I most wanted to write about, were quite prone to overlook cycling.  And so in a variety of places, I ended up turning to cultural sources: not the documentary records of government agencies, but instead movies, comic books, magazines, advertisements, and the occasional Boy Scout merit badge book.  I wanted those popular sources to help me understand the attitudes that governments and institutions took when it came to making policy decisions about bicycles, as well as filling in the gaps where the policy documents petered out.  For me, this meant a lot of working through sources like the excellent Lantern open-access database of Hollywood magazines, communicating with film archives in the Netherlands to view obscure films, trawling the Prelinger archives, and searching the records of the American Film Institute.

I was wrapping up several years of this type of research in the spring of 2014, when British Pathé dropped a digital history bomb on me: the venerable newsreel company released 85,000 of their historic films online, basically uploading an entire archive to the world.  It was epic and exhilarating: I spent weeks trying different search terms to find relevant newsreels, piecing through the massive upload.  British Pathé had digitized not only full newsreels, but clips from cutting-room floors, outtakes, alternate versions, and compilations.  There was nothing like it from a similar American newsreel company — the large American firms had not completed any sort of comparable digitization projects, and their materials were not easily accessible by the public; for example, viewing the Universal newsreel collection in the National Archives  (RG 200 UN) requires traveling to College Park, Maryland and arranging individual screenings of the films themselves.

But British Pathé had dumped an entire archive onto the internet, just a click away.  So for a month or so, while the spring Wisconsin weather was terrible and I was largely stuck inside, I spent hours each day winnowing the films (and tweeting my finds).  Eventually, I organized the films that I found meaningful into a number of Youtube playlists.  As I saw it, there were a number of themes: bicycles in World War I and World War II, films about cross-country cycling races, professional road cycling news, newsreels celebrating (and mocking) innovations in bicycle technology, and most exciting, a surprising number of films about women’s cycling.  I also created a master list, organized chronologically — from undated films that might have been as early as the 19-teens, ranging up into the 1970s.

The wartime films had some particularly arresting images, ranging from World War I signal corps troops, to postwar bicycle tourers traveling to a British memorial commemorating wartime cycling dead, to large numbers of homefront cyclists taking to the wheel in the midst of both wars.  The featured image for this blog post is from an Australian film describing a WWII civil defense organization: the ARP, or Air Raid Precaution wardens.  “Young Knights and fair ladies of the wheel” were “recruits for the ARP cycle corps,” boasted the narrator. The boys don gas masks astride their bikes, while the girls knit.

All told, I found more than a hundred films of varying lengths, and perhaps I’ll write more detailed individual blog posts about some of these other films eventually.  There’s a number of clips of interwar women’s cycling star Evelyn Hamilton that are fascinating, and the films “Kitchen Cyclist” and “Housewife Cyclist” could fuel an entire gender studies symposium.

But eventually, just six films made my list of absolute favorites.  (Of course, your list of favorites will probably vary; I was less interested in the competitive cycling than most observers would be.) Several of my favorites were about continental cycling from the British perspective; often commenting on cycling in Amsterdam or Copenhagen.  “Cycle Town,” from 1923, highlights Copenhagen, and finds an adorable little ragamuffin to interview:

“Cyclists in hundreds — thousand (millions it seemed to our cameraman!) throng the City of Copenhagen–” reads an inter title slide, before showing off some bicycle-specific infrastructure:

Another personal favorite is a 1926 newsreel reporting on women’s competitive cycling in France. While there is an impression that British Pathé finds the story newsworthy only because they and their viewers think women cycling competitively is outré, the women appear completely unconcerned or uninterested in that possible criticism. They are here to compete. It’s some sort of championship, and they’re not messing around. Oh sure, there’s some smiles at the line-up, and a neutralized slow pace until they get their rolling start. But then they’re fierce competitors, whipping around a bend, bumping shoulders in the sprint, and getting into arguments at the podium about who blocked the other’s line.  It’s fantastic; worthy of a Tour stage.

My final personal favorites is from World War II.  “Splinters of 1943” is an amazing historical document.  As a wartime instructional film from the Ministry of Information, it shows the British reliance on personal bicycles for wartime worker’s commuting needs. The “splinters” here are glass shards; the goal of the propaganda film is to encourage Britons to keep the wartime roads clear of tire-puncturing debris.  But the format is fascinating; a driving poem recited over moving imagery, it feels very much like a conscious echo of the far-superior W.H. Auden poem behind the 1936 “Night Train” film, valorizing the postal service.  For its part, “Splinters of 1943” starts with the same urgency: “Here come the workers, in hurrying ranks / to build us our battleships, bombers and tanks,” intones the narrator.  A glass shard punctures a commuting worker’s tire:  “His tire is gashed and can’t be repaired / whilst rubber is short and can hardly be spared.”  The bicycle in wartime is a strategic resource, and the short film quickly turns to guilting the viewers into keeping the streets clean for cyclists.

After a month or so of losing myself in the massive British Pathé upload, I eventually had to stop to assess what I had learned.  The films were fascinating, and I had enjoyed them immensely.  But they weren’t the documentary resource that I needed to understand the history I was exploring. They weren’t helping me finish the manuscript for Bike Battles. There was very little in the collection that helped me to understand American cycling better, which was my ostensible goal. Yes, there was an increased ability to contrast child-focused American cycling in the 20th century with British and continental adult commuting. And there was clear visual evidence of something American cycling historians had already documented: by the early decades of the 20th century, there was an increasing design gap between multi-speed, mid-to-lightweight European adult bicycles and heavyweight, balloon-tired American bicycles. 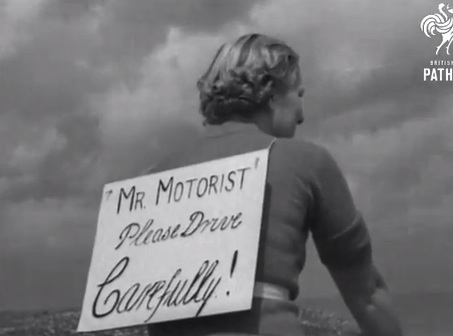 But what the British Pathé  upload made me realize most of all was the comparative lack of accessible American newsreel footage.  I had digital archive envy.  Searching through the massive upload just made me resent the difficulty and expense of traveling to College Park, Maryland to view the Universal Newsreel collection in the National Archives (which I found both logistically difficult and eventually not all that illuminating). It made me resent the need (and my financial inability) to travel to California to work in Hearst Metrotone newsreels at the UCLA Film and Television Archive. American film history sources are expensive to work in and difficult to access. By contrast, here was a massive treasure trove of British cycling history, made freely accessible to the world and easily searchable from my living room couch.  As a source, it illuminated a part of history that had often been passed over in professional archives; the experience of everyday cyclists was just too uninteresting to warrant mention or inclusion.  But here it was, in black and white and sometimes color, capturing the hopes and rides of the otherwise forgotten.

I can’t help but wonder — if American governments, institutions and corporations were to similarly support making history available to all, would we have a different view of our own history, one that possibly included the bicycle as an equally important part of our self-image as a nation?  Perhaps the saying should be, “our history is only as good as the sources we invest in.”

Just months after I published the above complaint about the difficulty of accessing American newsreel clips, the landscape has been changed.  Yesterday, July 22, 2015, the Associated Press uploaded what they claim will be nearly a MILLION newsreels and clips. Along with British Movietone and the already-uploaded British Pathe, the sheer number of films is amazing, overwhelming, and a treasure trove for historical researchers. http://www.aparchive.com/HowWeWork

What will we find? It’s time to start the race: