In the late 19th century, the legal world was scrambling to figure out how to deal with the appearance of a new means of travel – the newly popular bicycle. Before most state legislatures or city councils passed laws specifically addressing the bike, judges had to issue rulings about whether a bike was similar to or different from the many different kinds of vehicles already described in law.  While this was occurring before the personal automobile became widespread, roads were still filled with all manner of heavy and light horse-drawn carriages, as well as steam-powered trains and traction trolleys and goodness knows what else.  All of these things were called vehicles under the law.

Presented with the two-wheeled innovation, the courts generally ruled that the newcomer bicycle was also a vehicle (a legal category), and it was occasionally considered a carriage (another legal term), but it was not a de facto nuisance and its rider was certainly not a pedestrian.  It was a messy debate, but over a few decades of case law, the courts were figuring out what to think about the new addition to the public road.

But outside of the courtroom, in the world of objective reality, the bicycle was much smaller and lighter than all other vehicles and carriages. Unlike, say, a horse-drawn surrey, a bike was a vehicle that could be picked up and carried onto other vehicles, like a suitcase – so was the bicycle sometimes baggage in the eyes of the court? The bicycle was theoretically a carriage that could itself could be carried and placed in a railroad carriage, which was a juridical head-scratcher.  Did it count as personal luggage included in the price of the ticket, or could the railroad charge more?

At the outset of the decade, as the upper class fad of bicycling began, American railroads seemed willing to go along with the fashion, and count a bicycle as a part of the personal belongings of passengers.  Especially on recreational outings bicycles did not require an additional fee, and newspaper and magazine stories were filled with accounts of rail/bike outings.  But as the bicycle boom swelled, railroads (nearly uniformly) began to tell passengers that their bicycles could no longer be counted as personal baggage. In the midst of a decade of extreme financial swings, the explosively competitive world of railroad transport redefined the bicycle from “expected personal property of travelers” to “profit center” — though not without sparking conflict.

It was, as always, a problem of classification.  The central problem of defining the bicycle in the baggage car was an outgrowth of the difficulty that the courts had originally had classifying the bicycle on the road. The bicycle fit into multiple categories of the existing definition of vehicle, which messed with the minds of bright-line-seeking jurists. It was the same kind of definitional problem

when classifying bicycles that were not being ridden, but were themselves riding. LAW official Isaac Potter made this connection in an 1896 edition of Century magazine, directly linking the confusion over road law with rail law: “‘The bicycle is a vehicle,’ say the railroad lawyers, ‘and cannot therefore be baggage.'” An 1898 Harvard Law Review article agreed on this connection, finding case law “hardly conclusive, for while for certain purposes a bicycle may be classed as a vehicle, yet for other distinct purposes it may belong to another general class” and therefore might conceivably count as luggage.[1]

Particularly for touring and leisure trips, the problem was so acute in New York  in 1896 that the state’s cyclists pushed a law through the state legislature in an attempt to clarify matters.   Colloquially known as the Armstrong Law, it declared in part that “Bicycles are hereby declared to be and are deemed baggage.” Provided that the passenger had a valid ticket, their bicycle “be transported as baggage for passengers by railroad corporations and subject to the same liabilities.”[2]

New York was out in front of the matter, but other states were not far behind in pushing legal fixes. A Missouri court heard a petition in 1896 for a writ of mandamus, an order for the railroad to follow a state law prohibiting extra charges. The court obligingly found that bicycles were baggage, since practically “A bicycle is not more bulky and will occupy no more room than an ordinary Saratoga trunk.”[3]

Common carriers – that is, transportation companies that were legally bound to serve the general public, and who could not refuse to transport anyone within broad regulatory boundaries — were not pleased with such logic, and tried to figure out ways around such state laws. A correspondent wrote to the LAW, complaining that a ferry company seemed to have come up with a new answer to an old question. The nature of the bicycle “is a question that seems to be puzzling the transportation companies,” according to the LAW member. The Massachusetts company’s finding? “The bicycle is a passenger!” This meant that cyclists had to buy a ticket both for themselves and for their ride; the bike had to have a ticket as if it were a person. [4] 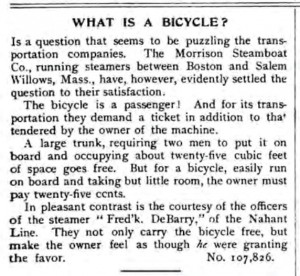 Carriers, for their part, were concerned about losing revenue by having to carry a bulky and (at the time) expensive item for some passengers without recompense or coverage of their liability.  The Express Gazette, a national magazine representing the shipping and transportation industry, presented their side of the argument in 1896: “Railroads could not undertake, for example, to carry gold, bank notes or valuable stones … as baggage is ordinarily carried, with a due regard to the safety of the valuables, the interests of the owner or their own risk.  Neither could they carry dynamite or gunpowder, or other dangerous things as baggage.” Yes, for the railroads, bikes were now compared to diamonds and dynamite: according to the spokesman for the Chicago, Milwaukee and St. Paul Railway, “the constitutionally legal right of the railways to refuse to carry a bicycle as baggage without compensation … is no less with respect to the bicycle than to diamonds or dynamite, the blacksmith’s forge, or the horseman’s sulky and fast trotter,”  (a type of horse-drawn recreational carriage).[5]

In New York, common carriers explored complex ways of avoiding that state’s Armstrong Law. Some New York trolley cars tried to get around the law by disingenuously sending cyclists to the next station, which just happened to be in New Jersey, where they miraculously had to pay an extra fare.[6]

Even without such extreme measures, New York’s Armstrong Law failed to create a binding precedent.  While it was a noble attempt at solving the definitional problem, and even with Ohio and Rhode Island following suit, it failed to stick. By the end of the bicycle boom of the 1890s, case law outside of New York was “decidedly against the view that a bicycle falls into the category of baggage,” according to a major legal treatise.[7]

The net result of this early bike battle will be instantly familiar to any 21st century airline traveller paying increasingly high rates to bring their bicycle along on their trip. While the 19th century courts were in agreement that the newcomer bicycle was a vehicle, they weren’t sure that it was baggage.  No higher court left a lasting precedent that declared the bicycle to always be baggage, and state laws failed to take a stand on the matter. As such, in the present, most common carriers are free to define the bicycle sometimes as baggage and sometimes as an additional piece of shipping requiring a bicycle-specific (and sometimes hefty) fee.

The policy varies widely between airlines, both internationally and within the United States. The variance is so wide, in fact, that it seems arbitrary, with some airlines deeming bicycles as baggage falling within the price of the already-purchased ticket, and others exacting additional fees that are very nearly the price of another ticket. Maddeningly, some cyclists will encounter examples of each type of policy as they make connections between different airlines on the same trip.  Perhaps if more definitive case law or legislation had been established in the critical period of the 1890s, such arbitrary policy could have been avoided in the present. Alas, it seems too late now.

Still, it could have been worse. In retrospect, the bike battle over baggage highlights the importance of the legal debate over the definition of the bicycle as a vehicle.  What might have occurred without guiding case law that defined the bicycle as a vehicle?  Would municipalities and states have been free, like airlines, to arbitrarily create their own policy allowing or denying bicycles use of the public road, with abrupt changes at jurisdictional boundaries?  Such legal baggage would have seriously constrained the success of the bicycle as personal transportation.